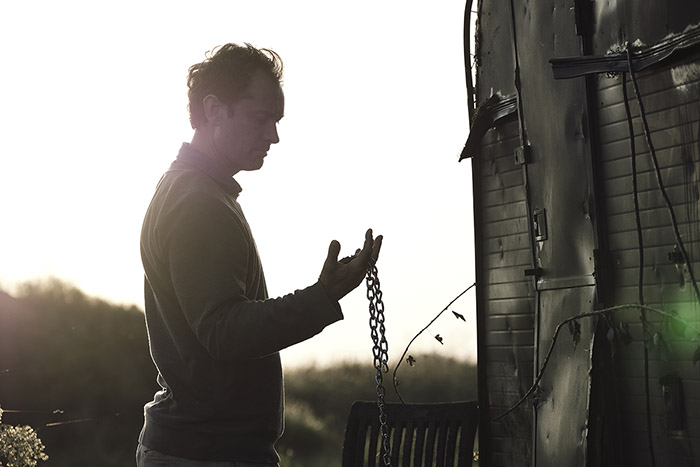 Jude Law stars in The Third Day as a man drawn to a mysterious island.

While most UK retailers are announcing bad news, Fife vintage specialist Scaramanga is celebrating its products being seen for the first time on a global network TV drama.

Innovative new show, The Third Day, starring Jude Law, Emily Watson and Naomie Harris, premiered on HBO on Monday and Sky Atlantic and NOW TV last night. It “chronicles the individual journeys of a man and woman who arrive on a mysterious island at different times” and will allow viewers to follow the events of a single day in real time.

The show is unique in that, as well as pre-recorded, scripted episodes, it will include a live broadcast of a theatrical event on Sky Arts and online planned for October 3. It’s also the first original drama co-production between Sky’s new production house, Sky Studios, Brad Pitt’s production company Plan B Entertainment, world-renowned immersive theatre company Punchdrunk and writer Dennis Kelly.

Cupar-based vintage interiors and leather bags firm Scaramanga supplied an extra-large iron antique padlock and a large iron one to the show’s props buyer in August last year for filming, which took place in the UK. They’re now being seen by a global audience with up to 5 million subscribers in the US alone as well as up to 19 million on Sky Atlantic and NOW TV in the UK.

Speaking about the firm’s first global network TV supply role, Scaramanga founder and Managing Director Carl Morenikeji said: “While our reputation as vintage specialists has seen our products used in 12 Hollywood and major UK movies to date, as well many UK network TV shows, this is the first time they’ve been aired on TV around the globe. We’re natural delighted.

“Better still, another three US network-made shows have bought Scaramanga products for props use and these will air next year as most are still being filmed. We’re hoping this will drive interest in our brand Stateside and in other places the shows are aired.”

The company, which also sells its bags, vintage furniture and homewares online and in its Cupar store, has previously been used as a supplier of vintage and antique props for UK TV shows including Strictly Come Dancing, Peaky Blinders, The Crystal Maze, Celebrity Big Brother, Hollyoaks, The Greatest Dancer, 60 Minute Makeover and Jericho.

Vintage fans can find the full range of Scaramanga trunks, chests, homewares and bags on their website at www.scaramangashop.co.uk