In the Club’s 2019 AGM, outgoing President Alan S. Morrison reported Club membership was now 120 members (17 ahead of this time last season) and still growing and that so far this season the average event attendance is 11.5% higher at 31.1.

The Club’s finances are also in a much healthier state, allowing the new Committee to consider more new initiatives next season.

Speaking about the Club year, Alan said that, despite following on from the record-breaking success of the previous year, it had not been one without challenges for the Committee, but they had rigorously tackled and resolved each issue in the best interests of members with determination and excellent teamwork.

Rather than rest on its laurels, the Committee continued the pace of progress set in the past two years through various initiatives, including:

On the latter, he said: “That included adding Mission and Vision Statements, revising our Financial Year, adding necessary flexibility to the Committee’s powers, allowing non-business people to be Members and formalising Honorariums so as to help recruit Committee members by allowing those who give exceptional service to gain some financial recompense at the end of the year.

“These were all measures designed to improve the Club’s resilience – to ensure it can continue to be run by volunteer Committee members despite our work lives getting busier by the year and make certain they can use the resources available to continue to deliver on the Club’s Mission.

“I see these measures as steps along the road to a future long-term sustainable and more resilient business model for the Club which includes it having its Secretary as a part-time paid official responsible for the day-to-day running of the Club. I hope one day to see that vision realised to ensure the Club’s long-term future.”

“This has been a Club year of which we can be very proud indeed,” he said, before thanking this season’s Committee members – Vice-President Caroline Rochford, Secretary Emma-Jane Kerr, Treasurer Michael Stephenson, Past President Alistair Morris and Douglas Glen, Marie Paterson, Catherine Maciocia, Alasdair Kyle, Steve Smith, Dawn MacPherson and Graeme Dickson for their hard work, support and friendship.

He also thanked departing Marketing Communications Intern, Comora Love-Mitchell, who graduates next month, for her work and her successors, Sanaa Sachdev and Stanley Parker, as well as Marketing Assistant Louise Cree, for excellent work so far. 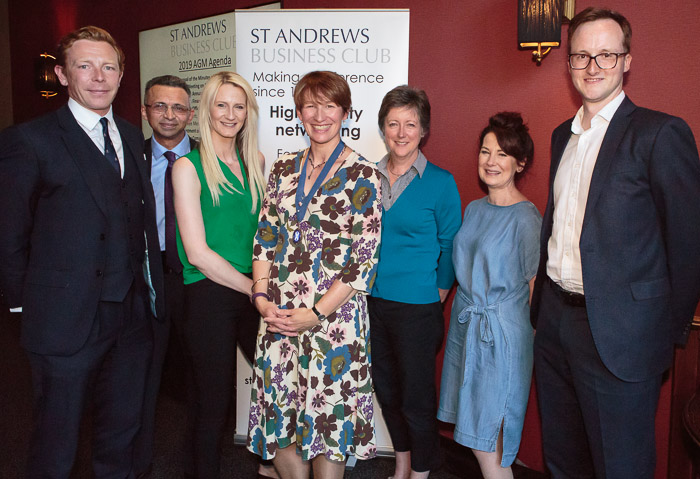 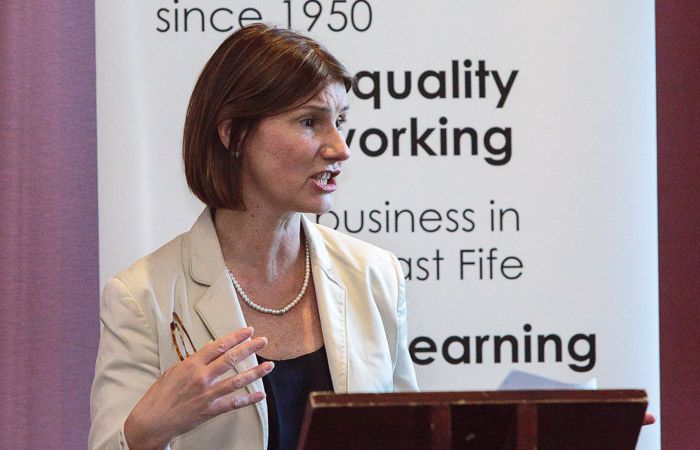 Equality in the workplace is an increasingly important matter for business.

St Andrews Business Club was delighted to have Carolyn Currie, Chief Executive of Women’s Enterprise Scotland, as Guest Speaker for the 2019 AGM Evening.

Carolyn talked about her extensive career at a senior level in financial services, including being a member of the T20 – the think tank of the G20 – and the work of Women’s Enterprise Scotland, women’s leadership and the boardroom and her ambition for women-owned businesses in Scotland – a huge contributor to the Scottish economy and faster-growing sector than most normally highlighted.

She encouraged everyone to enter the recently-launched Women’s Enterprise Scotland Awards – https://www.womensenterprisescotlandawards.co.uk/

Thanks to Carolyn for sharing her story and expertise with our Members and attendees.

For more information about Women’s Enterprise Scotland and its work, go to its website at https://www.wescotland.co.uk

Please  complete their Survey of women-owned and women-led business in Scotland.

For more photos, go to the Album on our Facebook page

NEXT EVENT: The Club’s next event is June 5: Members’ Success Stories + Networking, where members will share their favourite business success story.