Members and Guests enjoyed the Club’s 2019 Summer Social and Business Visit at the Forgan House base of The R&A.

The R&A group of companies was formed in 2004 to take on The Royal and Ancient Golf Club of St Andrews’ responsibilities for governing the Rules of Golf, staging The Open, golf’s original championship, and developing the sport. The British Golf Museum in St Andrews is part of the R&A group.

Together The R&A and the USGA govern the sport of golf worldwide, operating in separate jurisdictions with a commitment to a single code for the Rules of Golf, Rules of Amateur Status and Equipment Standards. The R&A, through R&A Rules Ltd, governs the sport worldwide, outside of the United States and Mexico, on behalf of over 36 million golfers in 143 countries and with the consent of 156 organisations from amateur and professional golf.

The R&A merged with the Ladies’ Golf Union in 2017 and now has responsibility for running a series of world class amateur events and international matches in women’s and girls’ as well as men’s and boy’s golf. The R&A works with IMG to stage the Women’s British Open and with the European Tour to stage the Senior Open. 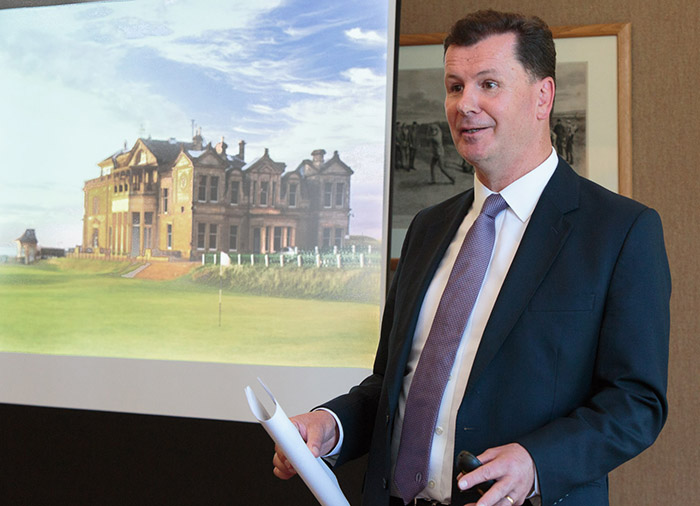 The R&A Executive Director – Governance & Chief of Staff, David Rickman, gave attendees an insight into the workings of one of the world’s leading sporting organisations

R&A Executive Director – Governance & Chief of Staff, David Rickman, gave attendees an insight into the workings of one of the world’s leading sporting organisations before explaining how it is aiming to invest £200 million in developing golf over the next decade and further support the growth of the sport internationally, including the development and management of sustainable golf facilities.

Members and their Guests then enjoyed networking over canapes and refreshments.

Thanks to the R&A for kindly hosting this event.

For more information about the R&A, go to its website.