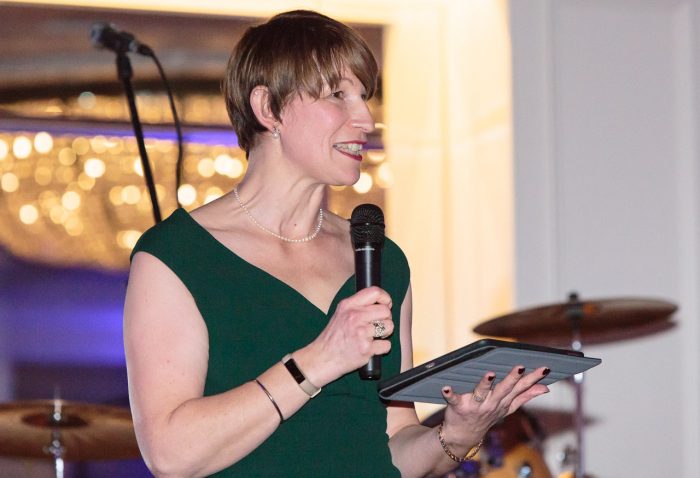 To celebrate the Club’s 70th birthday a special dinner-dance was held at the Old Course Hotel.

Members past and present and their guests were welcomed by a piper before enjoying a glass of fizz and networking.

A photograph of all the Club Presidents present was taken before everyone took their seats.

In her welcome, Club President Caroline Rochford explained the Club began in 1950 when ex-Provost George Bruce took up the idea of David Thomson to have a business club to help local businesses discuss and address issues affecting trade. Thus the first meeting was held on January 24 1950 in the Town Council Chamber.

Although Mr Bruce paid tribute to the part played by women in the business life of St Andrews, women were not initially admitted but it was agreed they might be permitted to attend meetings. Women were, of course, later admitted as members.

Caroline went on to explain that the club’s strength, then and now, is the breadth of its membership, who as individuals are involved in a wide range of business interests, local, national and in some instances global.

As Mr Bruce was keen to ensure younger businessmen were involved in the Club, Caroline said she was sure he would be delighted to learn of the introduction of the new daughter club, St Andrews Business Club Students, created last year by the current marketing communications interns, Sanaa Sachdev and Stanley Parker.

Caroline than through some of the Club’s past meeting places, including McArthurs Café – now The Rule – on South Street, the Scores Hotel and the New Golf Club, before listing some of its most prominent speakers, who include Sir Tom Farmer and Andy Irvine. A message was read out from Glen Pride, who was President in 1967-8, recounting how he was invited to join the Club before becoming its President the following year!

Caroline then thanked the committee members who helped organise the event, the staff of the hotel for their excellent service and to Audrey Clarke for her piping.

After dinner, Past Presidents Frank Quinault, Stephen Westwood and Ewen Sparks talked about times past in the Club before a raffle was held in aid of the Refugee Survival Trust, which Food For Support – a fundraising initiative co-founded by Stanley Parker – supports year-round through donations from special dishes sold at local eateries. It raised £534.

The prizes, mostly kindly donated by member businesses, were:

Finally, all enjoyed dancing till midnight to renowned band Ceilidhdonia.

NEXT EVENT: The Club’s next event is March 4: Inspiring Women, when the speakers will be entrepreneurs Rachel Weiss of Rowan Consultancy & Rachael Nixon of Chanix Millinery.