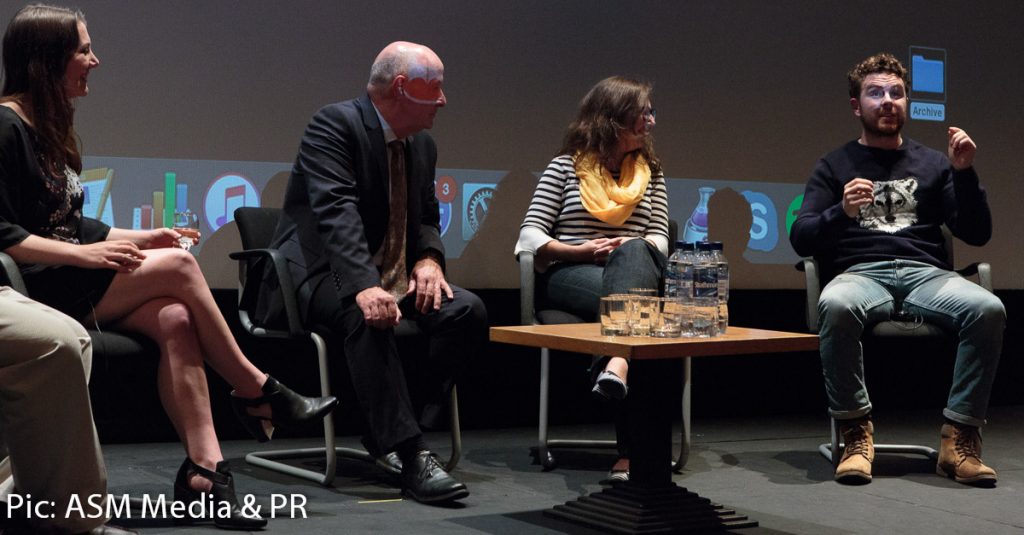 The University of St Andrews Enterprise Week Keynote Event, organised in partnership with St Andrews Business Club, took place at The Byre Theatre. The speakers took part in a panel Q&A at the end of the event.

North-East Fife businesspeople joined St Andrews University students, staff, members of the public and Club members to hear the stories of several of Scotland’s most inspiring entrepreneurs as part of this year’s university Enterprise Week.

The free Keynote Event at The Byre Theatre on Wednesday night heard the stories and lessons of three Scottish entrepreneurs. The Club partnered with the Enterprise Week student committee to help organise the event as part of its commitment to nurturing entrepreneurship in the area.

Attendees took part in a networking wine reception with canapes before being welcomed by the Principal, Professor Sally Mapstone. She spoke about the increasing role of enterprise in the university and the importance of creativity in it.

Professor Mapstone then introduced Geoff Morris, the university’s Director of Special Projects & Community Engagement, who is responsible for the Eden Campus development in Guardbridge and he spoke about its vision and progress to date.

First of the inspiring entrepreneurs to share their story and lessons was Alan Mahon, co-founder of Brewgooder, the social enterprise which aims to provide clean water for a million people by producing and selling excellent craft beer and donating all the profits to clean water charities.

Alan spoke of the increasing importance of mission in business and told attendees how Social Bite, at which he works with Josh Littlejohn, went from a shop in Edinburgh’s Rose St to a planned village in Granton with high-quality affordable eco-housing for people suffering from being homeless. He also announced that students all over Scotland are being invited to join the Social Bite Sleep in the Park event in Edinburgh’s Princes St Gardens on December 9 in return for a minimum fundraising donation.

Next up was 2007 St Andrews Economics & Management graduate Ines Teles, who founded the university’s Entrepreneurship Society. She co-founded app company DWYL in 2013 after working for the NHS and consultants Accenture and talked about the importance of openness and the growing role for machine learning.

Final speaker was St Andrews alumna Pippa Geaves, who graduated with an MLitt in Art History in 2013 and a Postgraduate Diploma in Managing in the Creative Industries in 2014. While working for a PR and creative agency, the graphic and web designer won the Innovation award at the DevelopHER Awards in November last year.

Pippa then decided to explore the consumer side of playful design and stationery, by founding Jeeves & Co. Design Studio in January this year. She explained how a failure to plan a career before graduating had led her to end up at her local Job Centre, but the circuitous route she’d taken to creating her company felt better than the more traditional one and had taught her more.

The event finished with questions from the audience to the speakers.

Speaking about the event, St Andrews Business Club President, Alistair Morris, said: ”We’re delighted to have been asked to contribute to this event to help inspire the next generation of entrepreneurs and business people. The Club welcomes them to any of our own events.”

Bonnie Hacking, Enterprise & Employability Adviser at the University of St Andrews, said: “We’d like to thank St Andrews Business Club for its contribution to this event. We look forward to this being the first of many events we work on together to promote enterprise in our students and in the local community.”

For details of the final Enterprise Week events today [Oct 13] go to http://standrewsenterpriseweek.com