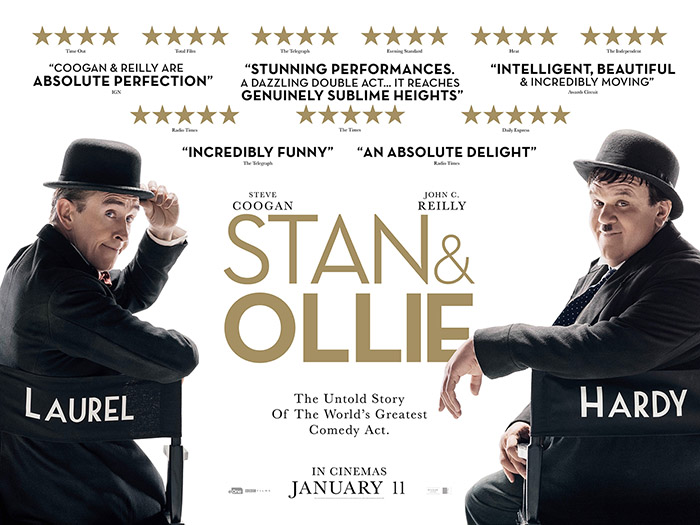 A poster for Stan & Ollie, which includes an antique suitcase supplied by Scaramanga.

Cupar vintage specialist Scaramanga, founded and run by Club Member Carl Morenikeji, is on Cloud Nine after one of its antique suitcases is used in a ‘significant’ scene in the new Laurel & Hardy biopic Stan & Ollie, released in the UK last Friday.

The film is the ninth Hollywood or major UK movie to use products from the Cupar-based firm in seven years. It stars Steve Coogan as Stan Laurel and Oscar nominee John C. Reilly as Oliver Hardy and follows the comedy legends’ ill-starred variety hall tour of Britain in 1953. It was written by Philomena screenwriter Jeff Pope and was filmed at Pinewood Studios, Dudley, Bristol and Worthing.

The new role for the Cupar vintage specialist came about when a props buyer who’d sourced items for 2015 movie Pan from Scaramanga called owner Carl Morenikeji in December 2016 looking for a period suitcase urgently for a “a significant scene”. Carl was able to supply a very large 1920s/’30s brown leather suitcase with corner-protecting patches and leather internal straps. 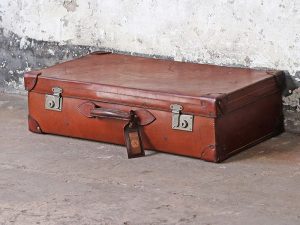 The large antique suitcase supplied by Scaramanga to Stan & Ollie.

Now Carl and the staff at Scaramanga are waiting with bated breath to see what role their case plays in the film, which reveals the tensions in the relationship between the comedy legends.

The company, which also sells its bags, vintage furniture and homewares online and in its Cupar store, has also been used as a supplier of vintage and antique props for TV shows including Strictly Come Dancing, Peaky Blinders, The Crystal Maze, Celebrity Big Brother, Jericho, Hollyoaks and 60 Minute Makeover.

Speaking about the firm’s latest silver screen success, Carl Morenikeji said: “It’s great to see another of our products chosen for a key role in another fine film. Although this is the ninth major movie to feature our products, we’re as excited as we were the first time.

“We recently decided to stock even more of this kind of vintage travel case and trunks as they’re becoming more popular for use as home storage, so anyone wanting to buy something similar can do so on our website. Or pop into our store on the outskirts of Cupar to see these and other items just like those we’ve sold to film and TV productions.”

Vintage fans can see the full range of Scaramanga trunks, chests, homewares and bags on their website at www.scaramangashop.co.uk