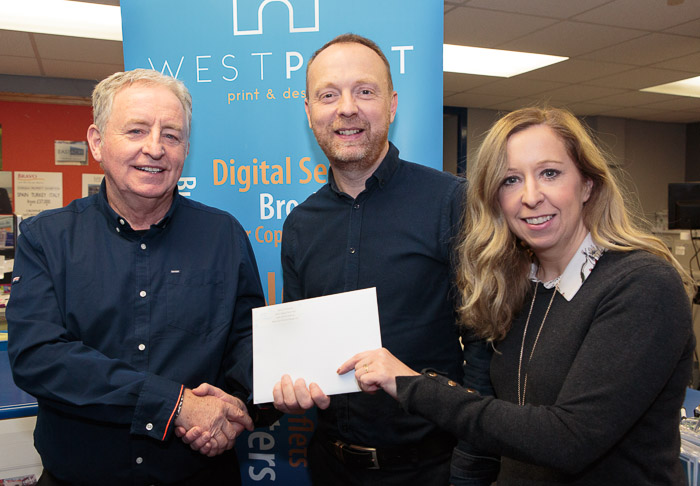 Retiring founder Terry Scanlon (left) is presented with his Auchterlonies vouchers by Stephen and Claire Simpson.

St Andrews businessman Terry Scanlon is handing over his ink roller to swap printing for more putting and poolsides in the sun after 35 years running West Port Print & Design and 54 years in the print trade.

Terry (69) started the business in 1983 with just two staff and one small, single-colour press after learning his trade over 18 years with the University of St Andrews Printing Department.

Over the years West Port’s reputation for quality fuelled its growth and in 1997 it bought its first full-colour press and was one of the first to offer a ‘while-you-wait’ colour copy service. Since then the business has expanded to a staff of 12 and continues to advance through embracing the latest technologies for its clients, many of which are prestigious locally-based brands such as the R&A, St Andrews Links Trust and the Old Course and Fairmont hotels.

For customers the story is ‘business as usual’ because the new owners are existing directors Stephen and Claire Simpson. Stephen, a Member of St Andrews Business Club, joined the firm in 1997 and became a director in 2008. He and Claire aim to continue the firm’s growth.

While they’re expanding its services, Terry plans to be hitting the fairways and travelling to Portugal with his wife Catherine (who used to help out in the shop on Saturday mornings) more often, where he enjoys golf, cycling and eating fresh fish by the sea. His retirement gift? What else but Auchterlonies vouchers!

Speaking about hanging up his printer’s apron, Terry said: “It has been a blast for 54 years. The changes in technology have been unbelievable!

“I must thank all my staff for their hard work and my customers for their loyal support over the years. I hope they’ll support Stephen and Claire just as much.”

Stephen Simpson said: “Terry’s legacy in building West Port Print & Design to the high standing it now enjoys now has to be acknowledged as a phenomenal achievement. Claire and I have a very hard act to follow, but we’re keen to build on the reputation we’re inheriting.”

For more information about West Port Print & Design, go to its website at www.westportprint.co.uk