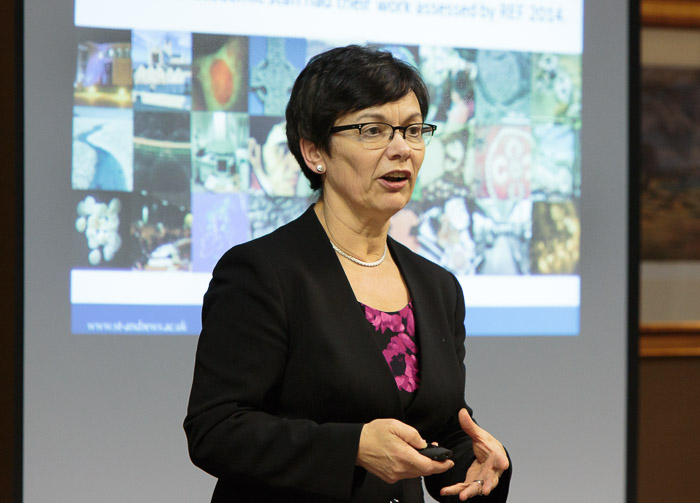 Professor Verity Brown, Vice-Principal (Enterprise & Engagement) at the University of St Andrews was the speaker at the November 2016 evening meeting of the Club.

Verity is a scientist, first gaining a BSc in Psychology before going on to earn a PhD in Neuroscience from Cambridge University. She added an MBA while on secondment to the pharmaceutical industry for four years.

Professor  Brown joined the University of St Andrews in 1993 as a junior lecturer and has risen through the ranks, holding prestigious international research fellowships and various management positions within the University. Two years ago she became one of the Vice-Principals, with responsibility for Enterprise and Engagement.

In her talk, “How does a Modern Ancient work?” she described how the University of St Andrews is organised, managed and run.

Among the enlightening facts she revealed were:

Professor Brown went to outline the many ways in which the business community can work with the University. These include:

Verity also described fun ways in which people in the town can interact with the university, including its annual festivals, many of which began as University initiatives, membership of its Sports Centre, and taking short courses through the Open Association.

While answering questions, Verity mentioned the vision for the Guardbridge Energy Centre site including the Sustainable Power and Research Campus – which will allow around 300 staff to be based outside the town centre alongside SMEs with whom they may work on projects.

For more information about University of St Andrews, go to www.st-andrews.ac.uk