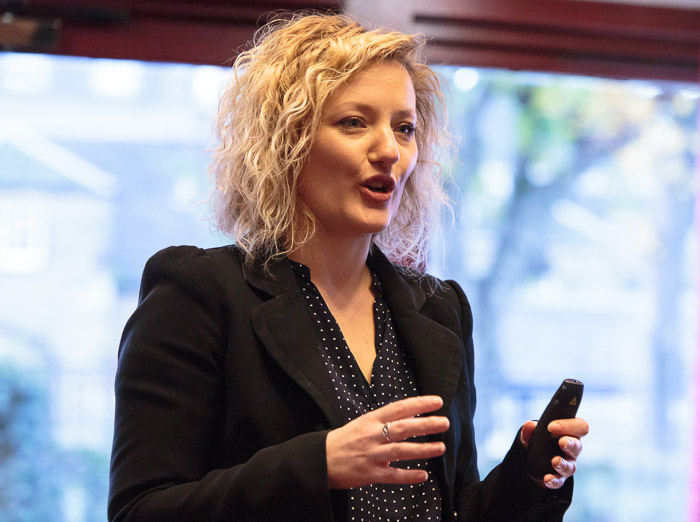 Rhonda McCrimmon, BID Manager, BID St Andrews was the speaker at the November 2016 breakfast meeting of the Club

Rhonda has a strong background in financial and event management – having worked as an accountant with Fife companies Carters Accountants, Craig & Rose and SRUC Elmwood before spending four years as a financial accountant at the University of St Andrews, including work on capital projects.

Rhonda told Club members and their guests about the many things BID St Andrews has accomplished since the Board was elected by levy-payers in November 2015.

She first explained that the aim of BID St Andrews is to harness the power of the global brand of St Andrews for the benefit of local businesses and the community. Through the BID a series of projects and services are creating a more vibrant business environment focused on delivering an enhanced customer experience and reputation for the town.

The BID is managed by a dedicated Board of 10 volunteer representatives from levy-paying businesses and two local councillors plus the BID Manager, Rhonda.

The compulsory business rate levy is paid by qualifying businesses whose premises are inside the BID area and is collected on BID’s behalf by Fife Council. By the end of October 2016 £129,000 of levy income had been collected – 87.6% of the amount due. The balance is mainly accounted for by businesses paying it via payment plans.

BID’s grant income of £35,000 to date is on-track with the business plan target. It’s also received ‘in kind’ support from several businesses including Thorntons Solicitors and The Old Course Hotel (£1,930 of free meeting space) and University of St Andrews (£20,000 of staff time, accommodation, office, meeting and function space).

Reviewing the highlights of what BID St Andrews has done with those resources, Rhonda first went over the key facts of BID’s first major event – the 1st St Andrews Photography Festival, which was held from August 1 to September 11:

The next photography festival will take place over four weeks in September 2017.

During July 2016 BID also for the Land Train to return for a trial summer week after a well-received run during the 2015 Open weekend. The route linked the sights of St Andrews and showcased the town.

The train proved popular with both tourists and locals. As a result it will return at Christmas and BID is in talks about an extended run in Summer 2017.

One of the main themes of the BID Business Plan, as a result of feedback from levy-payers about their priorities, are the Clean and Green projects. Rhonda summarised progress on each of these:

Rhonda went on to explain the various initiatives BID has lined up to help the town maximise the economic benefit from the Festive Period this year by raising the profile of St Andrews as a Christmas destination:

BID has agreed in principle to take over the organisation of the Christmas Lights event from 2017 and will explore possible options with a stewardship team from The Old Course Hotel in early 2017.

Rhonda next outlined two of the events planned for early 2017:

Finally, Rhonda’s presentation explained that BID is exploring options for its online presence and is developing a strategy for marketing and promotion including:

Answering questions from attendees, Rhonda said which events would become annual fixtures would depend on the KPI performance of each,

Rhonda also confirmed that BID is keen to engage with all groups in the community and would welcome more involvement from levy-payers.

For more information about BID St Andrews and for contact details, go to https://bidstandrews.co.uk/

JOIN NOW
This meeting is open to Club members and their guests only.

Click here to find out how to join the Club. Annual membership is just £30. Small additional charges are made for certain meetings, usually to cover catering costs.